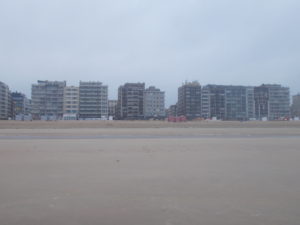 I spent the morning in De Panne on the Belgian coast – managed to find a bakery where I could have breakfast for a fraction of the price offered in the hotel. It was cold, wet and windy on the coast this morning so a hot chocolate was also in order.

In Belgium that means you get a mug of hot milk, and a bar of Belgian chocolate on a stick for you to swirl in and have it as chocolatey as you like. Add a lump or two of sugar if required and enjoy. Served with a chocolate eclair (sort of – somethign like a chocolate eclair, filled with vanilla).

The good news is that once I got past Ghent the weather improved and it was a hot, Sunny day again – all the way to Cologne. Unfortunately the traffic was really not what I was hoping for. German holiday traffic all the way from De Panne, countless lorries, the first traffic jam was before I even made it to the motorway!

In many ways, it felt like I was driving through one big international traffic jam. The Antwerp Ring – that was a nightmare. Queueing back to the „Kennedy Tunnel – 5km“ sign – and even further in the opposite direction. From then, traffic was heavy all the way. Moving at times, stop-start at others. I don’t like stopping too much when I’ve got hundreds of miles to cover – but I did have to stop at the services to grab a sandwich, and to refill my water bottle – which I had finished off while stationary in a traffic jam.

It was a bit of a relief when traffic started thinning out as I entered the Netherlands and I enjoyed going cross-country to get to my next stop of the day – despite getting stuck behind a slow moving lorry.

It was a long straight road which went on for probably around 10km – but because I sit on the wrong side of the car for driving on the right, I hadn’t a clue whether or not it was safe to overtake. The British car behind me had the same problem – but the Dutch overtook the both of us and the lorry, no issue! I did eventually sieze my opportunity to overtake, when the road bent round, just enough for me to be able to see that the coast was clear, and I got past.

The second stop of the day was the War Museum in Overloon. It had taken 4 hours to get there so closing time was less than an hour away – but they let me in, and I had a quick look round…mainly at all the US army vehicles kept there. 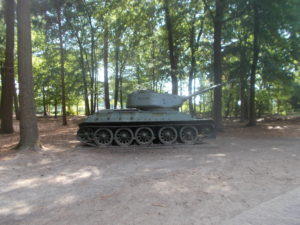 The museum is set in nice countryside, a woodland walk between the car park and the museum entrance. After 4 hours in the car, this was very welcome – as was the ice cream I bought myself in the café on the way out. A couple of scoops of vanille ice cream, in a cone, which I ate as I walked back to the car.

Then it was time to set my sat nav for Cologne. By this time I was also aware that my petrol gague was showing about a quarter of a tank left – but decided, given how expensive fuel in the Netherlands is, I’d stop once in Germany.

Back on the road and before I left the Netherlands, time for one more traffic jam, as I went past Venlo, then crossing the German border where the motorway became the Autobahn A61. I eventually filled up just off the A52 near Mönchengladbach, just under 40 miles from Cologne.

By this stage the needle was in the red zone but the fuel light was yet to come on, so time to fill up, but no immediate cause for concern. This was my car’s first tank of petrol since Fairford on Tuesday lunchtime. So: One tank of fuel gets me from Gloucestershire to Germany. My old J reg wouldn’t have done that!

Driving in to Cologne itself was challenging – but nothing to worry about really. Top tip: It is completely normal to be driving along in Cologne and then see a tram in your rear view mirror. In sections, the road and tram lines are shared.

I finally reached Cologne at 19:30 – managed to find somewhere to park on the street near my hotel. Within 20 minutes I was unpacked, in my hotel room.

After all that driving, I needed a walk, a drink, and dinner. I headed down towards the river and found a restaurant overlooking the Rhine. I must have been thirsty, I downed two glasses of water in seconds! Then I ordered myself a large pizza, and that didn’t last long either!

Tomorrow, more driving – hopefully not as many hours as today! I’m off to Wolfsburg tomorrow, the home of VW. Quite fitting really. Driving to VW Stadt in a VW. It could well be the factory where my car was made –  I know they do make the Golf in Wolfsburg. I wonder if there’s any way of finding out??

It’s nearly midnight here so I’m off to bed.